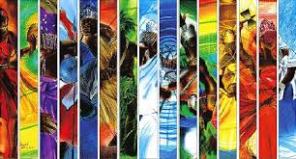 The articles in this blog describe facets of Candomblé, but make the assumption that you already know the basics.  As has been described here in greater detail, Candomblé is an Afro-Brazilian religion incorporating religious aspects from various African ethnic groups.  Candomblé is also divided into nations based on specific ethnic groups. Candomblé Ketu (a nation) uses the language, cosmology and theology of the Yorùbá (Orisha worshiping) people of Southwest Nigeria and Benin.

During the Trans-Atlantic Slave Trade, our ancestors adapted certain elements of Yorùbá religion that made sense for them in surviving in the new environment of the Americas.  Instead of describing some liturgical and mythological differences, this article focuses on general elements that have remained in tact.

The Yorùbá believe in God and call him Olódùmarè (and other names).  While Olódùmarè is referred to in many prayers, he is not directly prayed to.  While there is not an agreed upon direct translation of this name, it is generally understood to refer to his almighty power and domain.  He is responsible for having created the universe, the Orisha and breathing life into humanity.

Orisha are forces of nature that manifest through mythology as deities.  There is no set number of Orisha.  It is customary to see numbers like 200+1, 400+1 or 600+1 to signify the number of Orisha in the Yorùbá pantheon.  The “+1” in Yorùbá numeration refers to infinity and acknowledges that we live in an ever changing universe.  Some Orisha that used to be very popular and well known are now virtually unheard of, and we never know what the future will bring.

In Candomblé there are about 16 Orisha that receive reverence, and are regularly praised in terreiros.  The Orisha represent crossroads, bodies of water, wind, storms, fire, and land, in addition to communication, justice, love and nurturing, war, hunting, technology, etc.

Each Orisha has its own prayers, songs and dances, accepts specific offerings, has particular temperaments, is partial to certain colors and is greeted in its own unique way.  The Orisha also manifest by possessing initiates, called Elegun, Rodante (ho-dan-chee) or simply Iyawo within Candomblé.

It is believed that each person, in addition to having the protection of their Orí, is protected by an Orisha.  Divination by a priest(ess) reveals the Orisha offering protection to individuals.

The Yorùbá also believe in Orí, which literally translates to mean head but refers to the divinity in each of us, our overall destiny and that which keeps us aligned with our destiny.  Some of the first steps taken when entering Candomblé as an adherent include taking care of one’s Orí.

Similar to the Orisha, there are prayers, songs and specific offerings for Orí.  Unlike Orisha, there aren’t dances, initiation or possession relating to Orí.  Some nations of Candomblé consecrate an Igba (ee-Ba) Orí prior to Orisha initiation.  In English, this consecration is often referred to as “receiving Orí.”  Everyone is born with a head,  conscientiousness, divinity and a destiny.  What is being received is a consecrated vessel, not your head.

There are many other elements involved in gaining a deeper understanding of Orisha theology.  A bibliography is forthcoming for the blog and will include many resources for further research.

One thought on “Basic Orisha Theology”