Orisha Divination is Not Fortune Telling 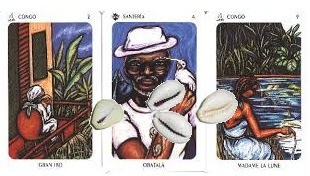 should take is to get a reading. While divination is absolutely important in all of the Orisha religions, it is usually not the very first step one would take.

North Americans are quite familiar with Ouija boards, tarot cards, crystal balls, palm readings and other forms of divination that we see popularized in movies and on television. The person using these tools to tell the future often leans in and tells the person on the other side of the table about the mate they’ll meet in the future, what they’ll look like, and how many children they’ll have together.

That’s not what Orisha divination is. Orisha divination (merindinlogun, jogo de buzios) is more of an assessment than fortune telling. Orisha divination, through communication with Orisha, helps us better understand some of the choices we may be making in life, and give us some advice about how to make better decisions and keep our lives in balance. This is different from other forms of (non-Yoruba/derived) divination, because tarot, for example, cannot communicate with the Orisha to diagnose and remedy a problem.

In order to understand the purpose of Orisha and Ifa divination, it’s important to understand the traditional Yoruba perspective of destiny. Traditional Yoruba culture includes the belief in reincarnation. Reincarnation in the Yoruba view, however, is not the karmic reincarnation that we find in many other cultures. We are not continuously born in order to correct the wrongs of previous generations, or to suffer in another life for transgressions of a previous life. A popular Yoruba saying teaches us that the world is a marketplace, heaven is home. It is understood that this life is temporary, and that we’re just here to enjoy the moment while knowing that our true abode is in heaven. This mind-frame survived in the diaspora for many African American families that refer to funerals as home-going services, making it clear that we understand that physical death does not separate us.

Since heaven is home, everything begins there. Before we are born, it is believed that our spirit sits for divination in heaven and chooses our destiny. WE choose our destiny before manifesting in flesh and bone. However, during the process of passing from heaven to earth we end up forgetting the destiny we chose. This is exactly where Orisha and Ifa divination come into play. Merindinlogun divination reveals Odu – ancient wisdom – that tell stories to help us stay on track. Orisha religion, among other things, is about balance. When we follow the advice of Odu and make the prescribed sacrifice, we work toward keeping our lives in balance and fulfilling our destiny.

We seek divination when we have decisions to make in life that could alter our destiny – moving, changing careers, marriage, purchasing a home, etc. We do not seek Orisha divination to make decisions that we can make on our own – like whether or not to leave a cheating spouse.

Unlike other forms of divination like tarot, Orisha divination will often prescribe a sacrifice (ebo). Although it’s true that a priest cannot force you to come back and perform the ebo, it’s probably best not to seek divination if you’re neither prepared nor interested in completing the prescribed ebo. While certain Orisha may be lending their support as you work through a particular situation, it’s important to remember that this doesn’t necessarily mean that you are a child of that Orisha. If something is revealed in divination that you later have questions about, go back to the priest who performed the reading to seek clarification from them; advice from others is pure speculation, and will likely confuse you.

In the end, keep in mind that the purpose of merindinlogun divination is to make sure we’re following our destiny. Sometimes, that means receiving information that we’re not ready to hear. Try to keep an open mind, but don’t expect the winning numbers to be revealed in the reading.